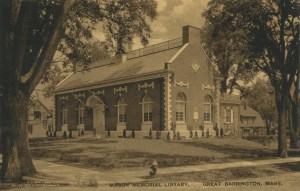 The town of Great Barrington incorporated in 1761, comprehended the whole of the Upper Township, — excepting that part which had been set off in the formation of the Indian Town, — and so much of the Lower Township, — or the old town of Sheffield — as lies between the present north line of Sheffield and a line drawn nearly east and west, crossing the Housatonic river at the Great Bridge.

Its area has since been  diminished by the elimination of its boundary lines in the formation of the towns of Alford and Lee. From 1743 to 1761 this territory had a corporate existence as the North Parish of Sheffield, — sometimes called Upper Sheffield, and during that period was included in and formed a part of the town of Sheffield.

The adjoining towns on the north, are Alford, West Stockbridge, Stockbridge and Lee, on the east, Tyringham, Monterey and New Marlboro, on the south New Marlboro, Sheffield and Egremont, on the west Egremont and Alford. 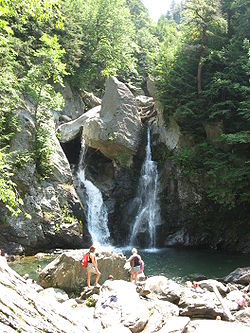 The extreme western limits of the town approach within about three miles of the neighbormg state of New York, and the north lime of Connecticut is distant not more than eight miles from the southern boundary of the town. In its outline the town is of irregular form, though its average length and breadth are nearly the same, — a little less than seven miles.

The whole area of the town, as near as the roughness of its boundary lines and the inaccuracies of their recorded sui-yeys permit of computation, is 28,621 acres, or a little less than 45 square miles.

In 1778 a considerable tract of land was taken from the north-westerly part of Great Barring- ton and included in Alford. This section was 652 rods in length, — north and south — with a width of 210 rods at its northern and 266 rods at its southern end ; again in 1819, another piece, south of and adjoining to the above described tract, was separated from this town and annexed to Alford, making with the first piece, a strip of 712 rods in length, and 296 rods in width at its southern end.

In the north-eastern section, that part of the Upper Township known as the Hoplands, was taken from this town and included in the town of Lee at the time of its incorporation, October 21st, 1777.

By the setting oif to Alford, Great Barrington lost 1075 acres of its territory, which was still further reduced about 4700 acres by the aimexation of the Hoplands to Lee. By these changes the whole reduc-tion of area since the incorporation of the town has been nearly 5800 acres.

In January, 1761, a small tract, including the dwelling and part of the lands of Garret Burghardt, was, on his own petition, set off from Egremont and attached to Sheffield, and on the incorporation of Great Barrington, a few months later, fell within the limits of this town.

This change causes the jog or irregularity in the west line of the town near the late residence of Jacob Burghardt, deceased. On the south, the divisional line between this town and Sheffield, which is now commonly surveyed and considered a straight line, was formerly the north line of the Indian Reservation, and in the Legislative act of the 13th of January, 1742, investing the — afterwards — North Parish of Sheffield, with parish privileges, is thus described :

Beginning at the most north-westerly cover of the Indian Land, in the west line of the town of Sheffield, running easterly on said Indian Land till it comes to a beech tree marked, near the mouth of Green river, then turning something northerly, and leavmg to Sheffield a small piece of meadow, or intervale of said Indian Land till it comes to range the line and beech tree on the easterly side of said meadow, or intervale, and then to contmue said line till it intersects the east line of Sheffield Propriety.”